Chiaravalli Group chooses the cloud to support its business

The prestigious mechanical engineering group chooses an ambitious digital transformation project for a faster, more flexible and more secure infrastructure thanks to the cloud. 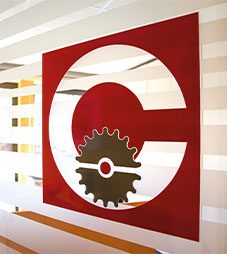 Chiaravalli Group Spa manufactures components for mechanical transmissions and high-precision components. Launched in 1955 by the ingenuity of Silvio Chiaravalli, the company has grown over the years, developing new product lines and creating three new plants, now boasting a workforce of 250.

Chiaravalli is a dynamic firm supplying the most prestigious Italian brands and exports to 52 countries, in a highly competitive international market. This is a company dedicated to innovation, constantly seeking new ways to enhance its performance.

True to form, it has chosen a global digital transformation project that invests in infrastructure IT, cyber security and the ecosystem of office apps, embracing the cloud and the concept of smart working at every level.

Where does a digital transformation project begin?

According to Andrea Chiaravalli, CEO:

The global digital transformation began with replacing our old firewalls with new WatchGuard machines. We first encountered Pipeline as a WatchGuard reseller and system integrator. We worked well together, and their technicians identified other areas of intervention. Starting with a simple job, we ended up assessing the capabilities of the cloud and the real possibility of making the whole business more secure, streamlined and high performing. There is no exact starting point for such an ambitious project. You begin with a tangible need and proceed from there with a program based on trust in the quality of both the technology and expert guidance.

Over the following months, precise areas of intervention were identified, together with specific actions on various IT fronts:

Email management, from on-premise servers to the cloud

Email is still fundamental to communication and company projects. Within the new user-centered infrastructure design, it became necessary to gradually cross over from using on-premise servers to manage email to using cloud-based servers instead.

The migration project has proceeded gradually and steadily. To date, 50 users’ email accounts have already been moved to Exchange Online and to the Office 365 ecosystem. Pipeline engineers trained an in-house IT manager who is completing all the migrations.

This project will allow individual users to access their email from multiple devices (desktop PCs, laptops or smartphones) and from anywhere connected to the network, with the same corporate security standards. An infrastructure that meets the demands of smart working.

The need to access corporate information resources from anywhere required new, fast and efficient identity verification systems. These include Multi-factor Authentication, which is for confirming identity on an application installed on a personal device, such as a smartphone, to gain access to the computer.

The solution was WatchGuard Authpoint, which enabled all users, both on premise and via the cloud, to securely access their Office 365 ecosystem and files and apps available locally and online.

In this area, it was also possible to set up an Access Portal with an attached web page accessible from outside. This means internal IT systems such as the intranet, the Dynamics Navision management system and remote desktop can be published and made operational.

RDP technology (Remote Desktop Protocol) is what enabled company employees to continue working during lockdown. With RDP, every employee was able to use internal applications through an HTML5 portal protected by WatchGuard Authpoint.

On a technical level, a static VPN was created between the company’s premises and the cloud tenant on Microsoft Azure using virtual machines in Virtual Desktop Interface (VDI) mode to make apps on local servers available to remote users.

Chiaravalli employees were able to access the Dynamics Nav management system and company files from home with maximum security and control. A major advantage made possible by the cloud, with Azure machines accessing data stored on local servers.

The company is evaluating new applications for Remote Desktop and VDI technology, testing them in a virtual environment on Microsoft Azure, which could one day replace the internal client.

Remote Desktop and VDI technologies enable you to transfer your desktop and apps from a personal computer to the cloud. The advantage lies in saving on the hardware performance of the device, leaving the workload and data transmission to machines in the cloud.

With VPNs, the management system is accessible across all corporate locations.

Another almost consequential innovation has been to further integrate the various branches of the company by setting up Virtual Private Networks (VPNs) between the W firewalls, encrypted network connections dedicated exclusively to corporate data. In this way, it was possible to grant management system access, initially only enabled at the head office, to all the company's offices.

An important innovation for synchronizing data and production flows between material production and storage sites, eliminating information asymmetries and improving global performance. An essential requirement for a company like Chiaravalli that has increased its branches but must also react to changes in a way that considers all available resources.

When IT works for business and collaboration with Pipeline

Fabio Gioachini, CIO of Chiaravalli, said he was very satisfied with the work done by the internal IT team, which includes Sandro Cerutti, CTO and Elvio Moretti, IT Support.

After years of experience in research centers and multinational companies such as Siemens and Microsoft, it was a pleasure to apply the experience gained to an ambitious corporate project.

An ambitious project made possible by the fact our management team put their faith in technology and by the productive collaboration with the IT department. My colleagues completed various operations independently as part of a schedule they drew up together with Pipeline IT engineers.

Flexibility, speed and security of the technology

Today, Chiaravalli has six offices and 250 employees and is both a European and global player. A condition that requires extremely high IT flexibility, speed of service and data and access security. We believe in technology to support our business, and our partnership with Pipeline has enabled us to implement an ambitious modernization plan to project Chiaravalli into the future

Our work with Pipeline was highly productive. I was particularly impressed by the technicians' ability to train and involve the company's internal IT resources. A tactical move that allowed the team to learn new skills and speed up project turnaround, working closely with Pipeline engineers

Our collaboration with Chiaravalli is an example of the value of IT consulting within a company. From a specific request, we were able to quickly detect existing problems, risks, optimizations and opportunities. An initial diagnosis that evolved into a shared timeline implemented with the support of management and the in-house IT team.